As the crowd at Mercury Lounge wavered between revelatory dancing and distracted social chatter, it was clear which songs in Hoots & Hellmouth’s  exuberant set were the favorites. […] 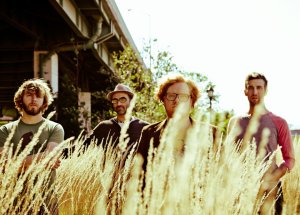 The crowd’s enthusiastic reaction to the older songs was testament to their longevity. The bounding tempo and rapid-fire lyrics of “Home for Supper” (from the band’s first album) had the audience bouncing and whirling around each other, their hands up in the air clapping along jubilantly. The down and dirty blues song “It’s Close, I’m Come Undone” (from a 2008 compilation cd), with its gutteral moans, gospel rhythms and screaming harmonica had everyone writhing with desire. It was the best gospel you ever did hear city boys sing.  (see for yourself in the video below)

The evening began with two Boston bands: the guitar/cello duo Tall Heights, with tight arrangements and pleasing harmonies, followed by Darlingside. The five men in this band bring together a range of musical influences that result in dense compositions and a slew of musical styles. There are distinct phases in the songs sparked by changing tempos or melodies and occasional moments of ingenuity, such as dropping the instruments and clapping in rhythmic unison. […]

Another excerpt from my recent interview with Kishi Bashi:

[…]  Years ago, while his pop-rock band Jupiter One was opening for Regina Spektor, Ishibashi fell into solo performances out of necessity. “Jupiter One was a very heavy beast to tour around the country, so I wanted something mobile and independent,” he explains.

When Spektor’s tour went to Australia, he had to leave his band behind. “I was playing solo, basically like a stripped down version of Jupiter One, and I got this huge response — it was ridiculous. I had to bootleg my CDs because I was selling over 100 a night.” His drummer, Dave Heilman, joined at the end of the tour and suggested that Ishibashi do a solo album. “The more I thought about it, the more it made sense,” he recalls, “I had a lot of songs, and this whole other side to me that wouldn’t really work with Jupiter One.”

Soon afterwards, Ishibashi jumped on board with Of Montreal and was immediately inspired by lead singer Kevin Barnes. “There was a whole new style, a level of complexity that I’d never thought of before. I never understood just how dense his compositions were.” And, like Barnes, Ishibashi was “into the idea of self-producing, instead of being a slave to a producer or being pressured for studio time.” […]

and check out this striking music video of hit song “Manchester”:

“So this whole record was a way for me to find a tribe. New York can be a great place to meet people but it can also be kind of isolating,” Sydney Wayser explained from the stage at Joes’ Pub, where she had her final, final record release show on Thursday night.  “I feel like we’re not as connected as we used to be with all of the social media […] So I wanted to connect, to build a tribe.”

“And then start a war,” Guitarist Gabe Duncan quipped from behind her, “That’s what tribes do, right?”

Wayser looks like the very last person to ever take part in a war. She seems straight out of a fairy tale, especially adorned as she was last night in a flowing beige one-piece with bell-bottom legs, a black crown-like cap and matching cape. She sways softly as she sings, her arms floating out like gossamer threads. She embodies the same fragility that she says she is aware of in all people, balanced by a bold resolve. 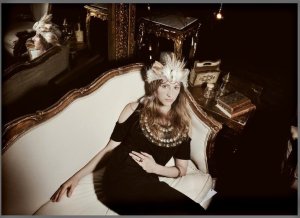 “I know in here it’s all, like … the 1920s,” Wayser said, acknowledging the refined manner of the venue, “but you don’t have to be all prim. You can, like cheer…”

“The 1920s were pretty crazy, you know,” came another quip from behind her.

“…Maybe the 1820s?” laughed a band member elsewhere on the stage.

She played through the songs on her newly released album, Bell Choir Coast, supported by five talented (and clearly witty) men behind her.  Half-way through the set, they tip-toed off the stage, leaving her alone to accompany herself on a new song.  Her intimacy was chilling, as she sang tenderly “Tell me, tell me, where would you want to go? Is there somewhere , somewhere far away you know?” At the song’s end, the sparse piano notes dissolved under her vocals, choked to a whisper.

For the encore, she invited a slew of friends from the audience up to the stage to join her on the bouncy “Dream It Up”.

“Memorize these faces because they’re all wonderful, talented musicians and they’re gonna blow your mind,” she cooed.

Wayser and her band leave on Sunday to tour with Blitzen Trapper. Speaking of mind-blowing, those will be shows to catch.

What happens when a blues singer takes on beach pop?  Give Icelandic artist Lay Low’s catchy new single a listen and you’ll find out.  “The Backbone” is alluring not only for the bright guitar lines and vocal harmonies driving the chorus, but also because it is haunting- in the best of ways.

It begins ominously: abstract sounds giving way to a blues guitar grooving under sultry vocals.  The song is self-referential, through cryptic lines like “The backbone of what I’ve become has taken over me”.  As in her previous work, there is a percussive cadence to Lay Low’s lyrics as she sings about persisting despite hardship and uncertainties: “Let go of the burden that brings you down, Let go of regret and shame, Let go, shake it off and start again…”.

The musical structure is straightforward, but there are layers beneath the simplicity that  inspire obsession.  The rolling tempo is strangely soothing, the melodies easy but engrossing.   As soon as it ends, I want to listen to it again.

The influence of Johnny Cash is loud and clear in Lay Low’s music, and certainly so on this song, which sets the bar high while wetting palates for the rest of the album.  Until that is released, I’ll just keep listening to this song- on repeat.